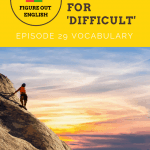 We often need to say that something is not easy to do. Let’s learn some synonyms for describing difficult tasks and jobs. <<<Subscribe on iTunes>>>   <<<Watch on Youtube>>>   <<<Support on Patreon>>> You can also find us on YouTube, on Spreaker, on Spotify.

How to use ‘difficult’ in phrases

Difficult is an adjective: It’s a difficult job. It’s a difficult task. English is a difficult language to learn. It identifies the noun’ job’, ‘task’, ‘language’ and so on. But there is also a noun difficulty: I have difficulties with English writing. It is used with structures like I have or There is/there are.

If you want to check combinations of words, it’s the best idea to use a dictionary of collocations. I recommend www.ozdic.com. We will say: very / extremely / incredibly / particularly / really + difficult

Difference between ‘complex’ and ‘complicated’

1. to grasp at straws When you are grasping at straws, it means that you are losing and you are trying to find the last possible chance to win in this situation. It usually describing some hopeless situation.

2. Catch-22 When the situation is so tricky that you can’t find the solution. The solution here is impossible due to some circumstances, from the very beginning.

3. vicious circle One trouble leads to another and the situation never stops being difficult.

Hope you like this episode! If you would like to support us, please go on patreon.com and make a little donation, we will be really grateful! Become a Patron!

41 How to talk about your English level

40 How to use tricky words ending in LY suffix

39 Ways to say HURRY UP | Figure Out English Podcast