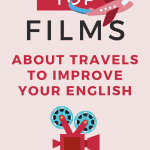 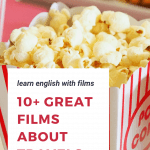 If you need English for everyday communication, there is a big chance you will want to use it in your travels. The easiest way to prepare is to learn English with films.

It takes some time to get used to the fast speech of native English speakers – so be selective: you can watch the whole film for the story but learn useful phrases and words from so-called transactional dialogues (how people book a trip, buy tickets, board the plane, go sightseeing or shopping etc.).

How you will improve your English with films

You can watch films in English (with or without English subtitles) on Amazon Prime, Netflix, or ororo.tv.

Here are some well-known films which will help you expand your travel vocabulary and improve your communication skills:

It’s a great film but also a useful resource for English learners – you can learn everyday phrases like the hero does throughout the film.

It is a story of a man who gets stuck in a New York airport because of the revolution in his own country. He can barely speak English and, because he can’t go back home, he needs to learn the language and find his way around this strange situation.

If you are interested in self-development, you have probably heard of Liz Gilbert. The book which this film is based on has inspired many people around the world.

You can easily use this film for improving your English: the dialogues are great as well as Julia Roberts’s professional acting and pronunciation.

Sometimes to lose balance for love is part of living a balanced life.

This may seem like not an obvious choice for a travel film, but if you like science fiction and time travel, why not use it for learning English?

The hero travels to different times in the past and people speak a bit clearer there than in the 1980s, so the dialogues will be easier to understand for an English learner. Give it a try!

This is the story of two young people who meet on the train somewhere in Europe and decide to get off in Vienna to spend a little life together. This ends up in a life-long romance.

It is a beautiful story which will be not too hard to understand if you are still learning English. If you like love stories, of course…

I wish I’d meet you earlier. I really like talking to you.

Accent: British, American, European
Genre: adventure, comedy
Types of Travel: by car, by train
Skills to learn: at the hotel
Watch on Amazon

A quirky dark comedy for those who love non-mainstream films. Some dialogues may seem a bit difficult, but the pace, on the whole, is not too fast and easy to adapt too.

Did he just throw my cat out of the window?

Accent: American
Genre: biography, comedy, drama, music
Types of Travel: by car
Skills to learn: at the hotel, at the restaurant, cultural events
Watch on Amazon

Road trips are great for dialogues and non-speedy story telling. This one – about an unlikely friendship of two men travelling together to the American south in the 1960s – is inspiring and heart-warming. If you like clever films and want to see one in English.

The world’s full of lonely people afraid to make the first move.

I didn’t expect anything special when I saw the title of this film. But there are so many things to like in it: from a personality-rich cast including so many classy British actors and actresses (meaning PERFECT British accent!) to elegant humour and warmth of the story.

This film is not so hard to understand – the heroes do not speak fast and they communicate with foreigners a lot. It also has a lot of useful phrases for everyday life and travels. And it’s fun to watch!

Everything will be all right in the end… if it’s not all right then it’s not yet the end.

Totally recommended for those who are learning English for work and business. You will learn a lot of set expressions and useful vocabulary. Need to improve your small talk skills? This is a great resource for you!

Last year I spent 322 days on the road, which means I had to spend 43 miserable days at home.

Accent: American, European
Genre: comedy, drama, romance
Types of Travel: by plane, by train, by car
Skills to learn: on the plane, on the train, sightseeing, at the restaurant
Buy DVD on Amazon

One of my most favourite movies of all times. A funny yet charming story about a girl who goes to France from Canada to get her fiance back and falls in love with somebody else, in the end. Brilliant humour, cultural diversity in action, adventures and romance – this film will make you smile!

Also, it is great for learning English – the dialogues are not too hard and there is a lot of communication with non-native speakers. Good for us, right?

Do you believe in love? The kind that lasts forever?

Accent: British, European
Genre: crime, drama, mystery
Types of Travel: by train
Skills to learn: on the train, at the restaurant, small talk
Watch on Amazon

Do you like classic detective stories? If the answer is yes, this film is a real treasure for you. Based on a famous Agatha Christie’s novel, it tells a story of an unusual murder on the famous Orient Express train. But for us, there is even more.

Again, we see outstanding British actors and actresses speaking ‘perfect’ English, but not just that. The cast is an international crowd – which is extremely useful for practising listening. Most of the dialogues are a linguistic masterpiece!

By the way, as much as I love this film, I totally hated the 2017 re-make. The actors are amazing, but the dialogues and the interpretation are not that great. So, I recommend the classic version.

The murderer is with us now!

I can’t say for sure if it’s a ‘travel’ movie or not – for me, it’s a story about dreams, establishing self-identity, looking for your place in life and so much more. A family goes on a trip across the United States to a beauty pageant their little daughter wants to be a part of. Will she win? No. But they will learn a little bit more about themselves and each other on this trip. This is a clever, non-mainstream piece of work.

If you are interested in improving your understanding of American English – give it a try. It’s quite fast and not too easy, but my students usually love it.

Oh my God, I’m getting pulled over. Everyone, just… pretend to be normal.

This film is not as classy as so others on this list, but I couldn’t leave out this witty comedy in the popular ‘road trip’ genre. Only try it if you are Upper-Intermediate level or higher – it has a lot of American slang and black humour (which is not always easy to catch if you are still learning English).

A young guy gets lost and finds himself on a non-existent Interstate 60 in search of ‘an answer and his dream girl’. He gets some help from a mysterious stranger played by hilarious Gary Oldman. You will hear both British and American accents and, hopefully, will learn a lot of new vocabulary.

I’m just a guy that likes to mess with people’s heads.

Other films to watch

Other good movies telling about different types of travels are Elizabethtown, The Bucket List, Catch me if you can, Around the world in 80 days, or Eurotrip. They could be a bit more difficult to understand (faster speech, more complex dialogues) but they all are totally worth some learning!

I hope you have found something interesting on this list. Learning English with films is an easy and practical way to improve your listening skills and vocabulary. Travel movies are particularly useful because they help you learn about the culture and teach you real-life communication skills.

Do you learn English using films and TV shows? Share your learning techniques with us in the comments!

You may also find useful:

Figure Out English Episode 23: Prepare your English for Travel

Check your Phrasal Verbs about Travel

If you want to understand casual English in films and TV series, you need to know phrasal verbs. They are an important part of everyday English speaking.

This Guide is for those who: