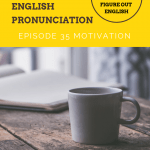 Worried about your English accent? Or do you get lost in all those pronunciation rules? Learn how to improve English pronunciation without stressing yourself too much with episode 35 of ‘Figure Out English’ podcast.

What exactly do we mean by pronunciation?

I suggest we use two different terms to describe the process of mastering speaking in a foreign language. There is ACCENT and there is PRONUNCIATION. These are two slightly different things.

Pronunciation means how the sounds of the language (English, in our case) are produced in this particular language.

For example, the difference between Russian R – when I say РЫБА and English when I say RUN.  These are two different sounds: in Russian it is a consonant, and in English it is a semi-consonant. The position of your tongue is absolutely different, and they sound not similarly.

When we start learning English as a foreign language, we need to understand which sounds are similar to the ones you are used to pronouncing and which ones you need to learn how to say because they don’t exist in your native language.

But the sounds are not the most difficult part…

The next step is to learn how to read words and phrases right?

And this is a tricky thing about English! One letter (for example, A) can be read in four or more different ways depending on its position in the word! Really?

That’s why we often say that English is a bit difficult to learn and this is really important to deal with. Why?

People simply will not understand what you say if you don’t know how to pronounce the English words correctly.

They will be expecting another combination of sounds and then, when you say something, they will be asking you to repeat or just look confused.

You could start feeling bad about your English and slow down in your progress or even lose any interest in speaking English. It is a big deal.

>>> Learn about the most commonly mispronounced words in English

And how will you hear English if you don’t know the right pronunciation?

When students come to me and they say: ‘Please help me with listening. Can you help me to understand native speakers better?’

In most cases, they are struggling with listening understanding because they expect the words to be pronounced differently from their real pronunciation.

To sum up, correct pronunciation it is when what you say matches what a person you are talking to expects to hear and when what you expect to hear matches to what they say.

This way, you will not have communication problems. Pronunciation influences the result of your conversations and it’s highly important to learn to do it right.

And what about accent?

Accent is a distinctive way of pronouncing a language. For native speakers, it will describe regional or cultural differences in how people speak English.

If you are a non-native English speaker (or learner), it is how your native language influences the way you speak English.

Here, the difference in sounds and pronunciation of words doesn’t prevent people from understanding each other if the accents are not too distant.

For example, a speaker of American English understands a speaker of British English without any problem (mostly ;).

Accent is the muscle memory, it’s mostly subconscious – automatic if you want to put it this way.

That’s why when English learners say: ‘I want to sound British’, ‘I want to sound American’, I can only tell them that it’s very difficult to do. Possible, but you will need a lot of time to reshape your whole speaking persona.

And the question arises: ‘Do you really need to do that?’

Do you agree with me? Post your ideas in the comments!

Great books to improve your pronunciation

41 How to talk about your English level

40 How to use tricky words ending in LY suffix

39 Ways to say HURRY UP | Figure Out English Podcast