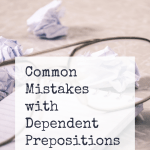 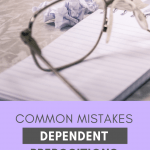 We all want to speak English correctly and naturally. If you still translate your thoughts in your own language word by word into English, there is a high chance you could be building some very common phrases inaccurately.

Why are dependent prepositions important?

Prepositions are hard to guess in a foreign language. You just have to remember how to use them. In English, some verbs prefer particular prepositions (without any logical connection), and we call them dependent.

Dependent prepositions are the ones which belong to verbs, adjectives, or nouns. They don’t form a new phrase, and they are often not translated into other languages or used differently in them.

For example, do you say

She asked a coffee or She asked for a coffee?

Can be confusing, right? Don’t jump to making your decision based on how the sentence is said in your own language.

In today’s lesson, I will show you which mistakes to avoid in using dependent prepositions after verbs.

Watch this video about 5 most common mistakes with dependent prepositions

And even more most common mistakes with dependent prepositions

Figure Out English 13 Everyday phrases: ‘It depends’, ‘It doesn’t matter’, ‘It takes’

Figure Out English 26 How to use ‘have’ in everyday speaking